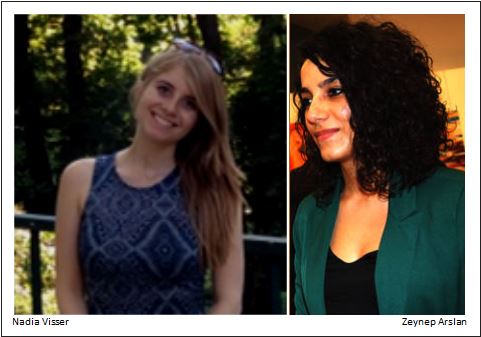 Dear Nadia, first of all may I ask you to introduce yourself please?

I am 18 year old and student from the Netherlands. Currently  I’m an International Tourism Management and Consultancy student. People tend to ask me where my family is from. I usually answer: ‘I am from the Netherlands’, but the continue asking ‘Yes, but from which city in Dersim are you?’ (She is laughing). I have been singing Zazaki music since a couple of years.  Since last year I try to do as much as I can for the Zazaki language and lately I’ve started singing in Kurdish.

When was your first getting in touch with the Zaza-Language?

My interest in Zazaki started with the music to be honest. In 2012 (together with approximately 25 other people from the Netherlands) I went to Turkey for a project called ‘Music Generations’. The idea of the project was to get in touch with traditional music in Turkey. After we had been in Ankara for a week, our Dersim adventure commenced. Metin Kahraman and Ahmet Aslan taught us several songs in Zazaki. When I got back to Holland I continued singing Zazaki music. When I started singing Zazaki, I received so many sweet and emotional comments from several people. Although I learned some things about Dersim already during the project, I saw with my own eyes that it is indeed very important that this language is being sung and saved from expiration.

What is the point that excites you to work with and about the Zaza-Language?

As I noticed how important this is for some people, I decided that I would like to focus on this kind of music. Back then I learned some beautiful songs by heart and sang them. I did not know any Zazaki back then, not a single word… I just learnt songs by heart and sang them. During the Munzur Festival in 2014 I had the pleasure to work with Gulê Mayêra for the first time. We both liked it. We had already been in several programs together.  We went to a freedom festival together. During this festival, the visitors had the possibility to write down what freedom means. Gulê wrote: ‘to express myself in my mother tongue’. As a Dutch girl it’s logical to me that I’m allowed to talk in my mother tongue. So this really touched me. In the same week there was a boy rapping in German. Gulê and I realised that this boy was rapping in German, but he wasn’t able to communicate in German. There I thought: ‘what kind of nonsense is this? To make music in a language you don’t understand?’ This was what I had been doing since my first visit to Dersim. So, in November 2014, I started learning Zazaki.

Zazaki is a threatened language. Why is it interesting for you to learn it and what is or could be the advantage for you?

The language touched me. The music, the people, the place… I do it for the people, I want them not to forget their beautiful language and culture, and also for them not to be ashamed of living their lifes as a Zaza. It became really important to me, I want to do something with my life. I want to do something for the Zazaki language. Coincidence or fate brought us together and nothing can keep me from it.

What are your current and next plans and projects about Zazaki?

I am planning to make an album with my good friend Gulê Mayêra and hope fully, we will perform a lot together. We both want to spread our music and message to as many people as possible. At the moment I perform regularly with Pêro Piya, a band in Holland consisting of six talented men from Dersim. I also would like to bring the Zazaki magazine Perloda Ma to the Netherlands and Germany in the coming months. Until now it has only been distributed in Turkey, but we think it would be good when it was also sold in Europe. In this way, the Zaza people here are being stimulated to read in their language about their culture. I hope my effort for this language inspires other people in the same way as I feel inspired by people who make so much effort for their own language, even though there were and are so many obstacles.

Many thanks to Nadia Visser for her time and effort to answer my questions frankly and sincerely.